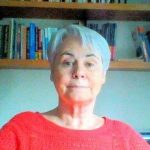 Though she initially struggled to find work outside the academy, Butler has built a strong career supporting programs at agencies that include the Centers for Disease Control and Prevention, the Environmental Protection Agency, and the National Cancer Institute.

“My most recent evaluation was a study of the use of CDC guidelines for clinicians for the prevention of Fetal Alcohol Spectrum Disorders (FASD) in primary care settings. I am also writing a book, Introducing Ethnographic Evaluation to be published in 2015.”

Prior to pursuing her PhD, Butler gained experience in a variety of disciplines and ultimately found that anthropology, given its flexible scope, was the field for her.

“I self-identify as an anthropologist. I have this single word on my business card and this is the first thing people hear about me in professional settings.

I was attracted to anthropology by all of the things that attract most of us to the field. It seemed exotic and I wanted to go to interesting places and study interesting people. I had a fairly vague idea of what that involved in 1970 when I began my graduate work. I studied largely under archaeologists because it fit in well with my scientific background. My bachelor’s degree was in pre-med – a zoology major with a chemistry minor. But even as an undergraduate, I was as much of a dilettante as I could possibly be given the rigorous science curriculum that my major demanded.

I have often described anthropology as the field for people who found it difficult to stay with a single major as undergraduates. Pre-med was my fourth major, preceded by biology, secondary education and psychology. The previous majors weren’t challenging enough in my humble opinion. Also there were a lot of smart guys in pre-med. And not many girls. What can I say? I was 19 years old.

I enjoyed my pre-med major but it was a time when it was difficult to for women to go to med school, especially if they were married with children. I chose the married with children route. When I made the decision to go back to school, medicine was out of the question even if I wanted to be a physician. I didn’t. I also didn’t know what I wanted to be. I chose anthropology as a graduate major because, at that time, they would accept people who had undergraduate majors other than anthropology. And I knew it had archaeology in it and it was what Margaret Mead did. I kind of wanted to be an underwater archaeologist.

With my fascination with everything, I really landed on my feet in anthropology. I LOVED it. Eventually I became a Latin Americanist with a focus in ecology and systems. It took me three years to decide whether I wanted to be a cultural anthropologist or an archaeologist. Eventually I chose cultural and did fieldwork in rural Guatemala.”

Though Butler initially went into academia, she decided to look for employment elsewhere.

“After I completed my fieldwork and was ABD, I got an academic job teaching anthropology in a joint sociology-anthropology department at Virginia Commonwealth University. I loved this too. Because it was a joint department with a small anthro component, I taught Introduction to Cultural Anthropology like everyone else (except the one archaeologist) and 14 other preps mostly in biological anthropology and Latin American Anthropology. I have always considered my time at VCU to be my Bachelors education in anthropology. After eight years I was denied tenure, mostly because the State Council of Higher Education in Virginia decided that anthropology was a frill. It was the worst thing that had ever happened in my life up to that time.   After a lot of unemployment and a couple of jobs – one as an economic analyst and one as an SAS programmer – I landed on my feet as a Program Evaluation specialist in public health at Battelle, a large non-profit technical consulting organization far more focused in science and engineering than on social sciences. I did evaluations in public health mostly for the Centers for Disease Control and Prevention (CDC).”

Going into public health, Butler found that her anthropological skills were a significant asset and she was able to sharpen those skills through practice.

“I had one of the best possible jobs given my skills, interests, training and disposition. In my evaluation work, I did some of the best ethnography of my career. I visited 47 of the 50 states and 4 foreign countries. I was able to sharpen the thinking and the skills I brought into my job and acquired a whole lot of new ones. I was able to help other anthropologists build careers. I worked with intelligent, capable and devoted public health professionals. I learned how not to be nervous giving the presentations that were a constant feature of my job. I learned to bully through writing blocks. I was able to move beyond the personal defeat of my tenure denial to a confidence without which I couldn’t have done the things I did.

How did I do it? It’s kind of hard for me to see that now. But there are things about who I became as a result of my experience as an anthropologist. One of the biggest assets was the fact that I never force my curiosity into a professional box. This sometimes made me feel insecure in conversations with statisticians or epidemiologists who know what to look at and what is likely to emerge from what they do. I think that this intellectual flexibility is a characteristic of most of the people who choose to become anthropologists. You can’t approach the kind of job I do with a fixed idea of what is going to happen. Anthropologists are generalists. This is why we changed our majors so many times.”

Looking back at the value of her contributions, Butler suggests that anthropologists can rely on our ability to question preconceived notions and offer insights that team members from other disciplines may not see.

“When you enter a field situation – or in fact any situation – try to suspend your expectations. You will always of course have an idea of what you are there to do and what you need to find out. But let the events unfold before your eyes. The epidemiologists took me along because they knew I would see what they missed.

And learn to listen. I think the 12 years of elementary and high school education we all got have trained us to manifest ourselves in professional encounters. People will often say inane things in meetings for example, because an instinct tells them they must say something. The person who talks most loses in professional and ethnographic encounters. When you start feeling insecure because you haven’t said anything, think about whether what you say has value. Your colleagues will appreciate it and so will your clients and your respondents.”

In considering what skills have been most essential to her career, Butler notes that ethnography was key.

“Ethnography and especially the importance of listening carefully to what people are telling you.

The holistic perspective intrinsic to an understanding of the culture concept. I try to look at whole systems before I start dissecting them. It is hard to explain this to non-anthropologists. I’ve never had to explain it to an anthropologist.”

Given Butler’s academic trajectory through graduate school, she adds that methods were a key skill she had to learn on the job.

“My graduate work taught me virtually nothing about methods for social research. I was fortunate to get a job at VCU in a joint department. My sociology colleagues there were my first mentors in methods. For example, the entire world of sampling statistics was a complete unknown to me. From looking at the methodology around sampling, I learned to align my group of study respondents to a set of characteristics – demographics, residence, age, etc. – and to estimate bias that I had to either correct by adding more or different respondents or explain as part of my design and reporting of the work.

In my academic work today, I see that things have become better in methods training for anthropologists. But then I am working only with departments focused on practice. Based on people I have hired early in their careers, I still find that most anthropologists are more comfortable with theory than with methods. This is unfortunate.”

“Any profession that requires you to describe and explain human beings or the things that they make or do. Policy research. Administration of programs, projects, any organization. International development projects. Social research.”

Though Butler feels her career was largely shaped by external circumstances rather than a carefully laid plan, she notes that having a sense of direction allowed her to find a profession where she could thrive.

“A few years ago, I wrote a brief autobiography which I entitled “Random Walk”. This sums it up. When I look back, I can’t see any major decision that was planned.  A lot of it was circumstance – the prejudice against women in medical school, the tenure denial, and my husband’s new job that brought me to Washington in the first place. However, a lot of it was my tendency to postpone decisions until the situation became urgent and there were few alternatives to choose from. It’s a good idea to have some idea of where you want to go and what you will do to get there. Even if your plan has to be adjusted or doesn’t work out at all, your sense of direction will have moved you to a more advantageous position.

There are certainly things I would change about my Random Walk if I could go back and do so. I would have identified a more appropriate graduate advisor, would have focused more on something specific in graduate school, etc. I would certainly have been more systematic in my job search after I left VCU. But I simply had no idea what to do and where to start.

An anecdote to demonstrate this: In 1984 when I moved to Washington, an unemployed assistant professor of anthropology, I went to the library (this was pre-Internet) and looked up about 20 organizations that did stuff that I might like to do. I wrote them all letters (pre-email too) about what I had done and qualifications I had. Out of 20 letters, two people said they had nothing now but to contact them later. Two people asked me to come in and talk to them. I did not recognize these as viable leads that I should follow up on. I had never even talked to anybody who knew how to look for non-academic jobs. Where would I have learned these things? Who did I even know who knew these things?

Now I would treat these leads as paths into the job market. I would talk to everyone who was willing to talk to me. And I would network out from them. I would treat the job hunt as ethnography, an effort to learn enough about the jobs people did to have a good idea where I could fit in.”