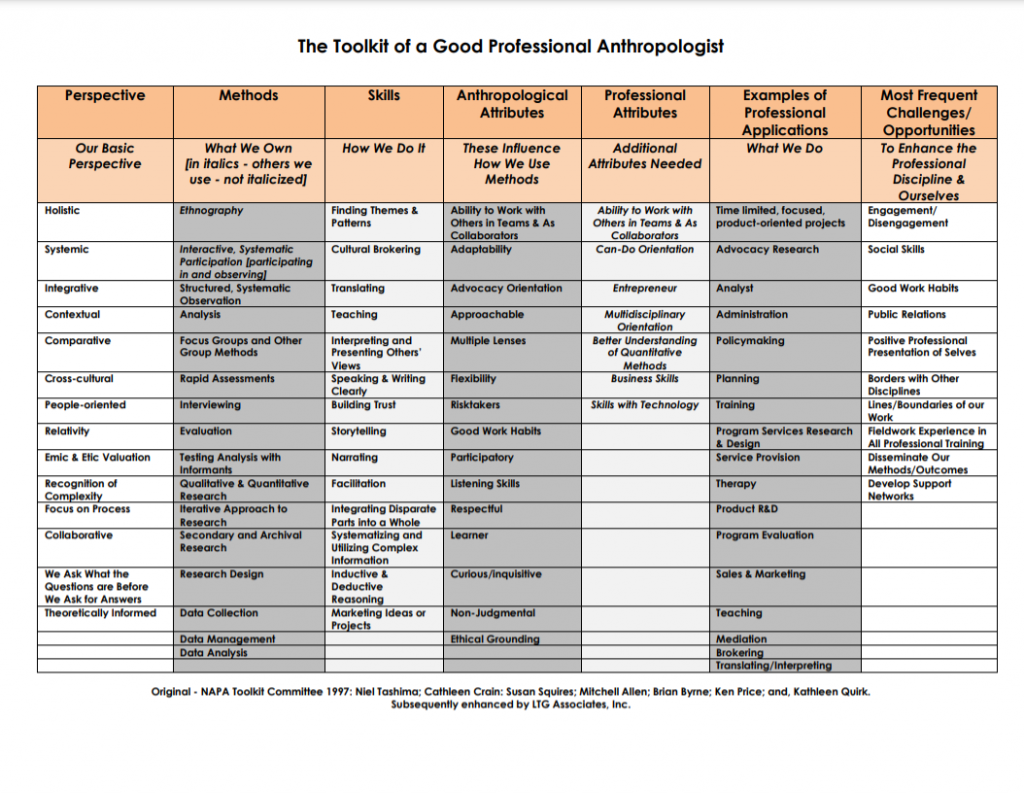 Instructions for use of the Toolkit: read, discuss, debate, share, add, repeat!

Background. The NAPA ToolKit of Professional Anthropology was developed as a result of an important discovery made by the NAPA Strategic Planning Group over two decades ago. While professional development was considered a priority by many anthropologists, the content of what needed to be developed was poorly defined. From that group sprang a committee that sought to begin the process of defining the toolkit of a good professional anthropologist. At the time it was developed, the Toolkit represented the shape of anthropology in current contexts. The Toolkit was largely focused to the use of cultural anthropology and could be developed in future iterations to reflect the whole of the discipline.

Why the Toolkit is useful. First, it has sparked animated and sometimes heated discussions among anthropologists. We have a history as a discipline of defining our discipline largely by indirection, a development perhaps based in our roots as an apprentice-type discipline. The direct defining of ourselves is something that has often been left to outside observers who frequently use the crudest of measures of what we do. Therefore, the very discussion appears to be useful in surfacing categories and creating working definitions. Professional anthropologists, and those who would teach aspiring professional anthropologists, are constantly challenged to define skills and tools. Therefore, well thought out, carefully constructed information that will speed their work is essential.

The Committee been made up of NAPA members and was originally constituted in California for the convenience of being able to meet easily and for extended periods. Original Committee members were: Niel Tashima; Cathleen Crain; Susan Squires; Mitchell Allen; Brian Byrne; Ken Price; and Kathleen Quirk.