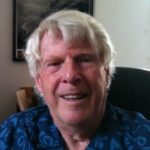 One of the major attractions of the profession for John was the freedom of choice, especially in selecting where to do fieldwork. The model posed by pastoral nomads, especially the Tuareg Berbers of North Africa and a romanticized sense of Lawrence of Arabia fed his appetite for getting to the Sahara desert. The crunch of what to do with his anthropology arose after he completed doctoral research in an Arabized Berber oasis community in the eastern Sahara of Libya. The idea of being in the desert was paramount, getting a job secondary.

At the outset of his career there were few career paths, namely academia or museum-related work. John chose the former but after teaching for a while, he discovered a critical fact about his own orientation to learning and being, based more on what he describes as “learning by being there” rather than, say, quoting books to students on someone else’s work. John’s main satisfaction is the joy he gets from being in the field. At that juncture his career branched into a position with the United Nations, namely an assignment back in Libya, for which he was able to use his socio-political knowledge and Arabic. A PhD. was required for the teaching and UN positions, but that has not been the case for all subsequent positions John held, though he suggests that the degree has been helpful for securing some of those. He notes that a Master’s degree often, happily, suffices.

A whole new career path opened to John shortly after his stint in the UN, which enabled him to continue in international work. This path was shaped heavily by US Congressional “New Directions” legislation in the early 1970s, which directed foreign assistance to the “poorest of the poor.” USAID, the main provider of such assistance, soon discovered the importance of social or cultural anthropologists in working in developing country communities. Applications of anthropology to international development occur at all levels, from project conception or design, implementation, monitoring and evaluation, to development management.

Knowing what incentivizes people in a distinctive socio-cultural context to understanding their needs and how to communicate these to project designers, implementers and managers is critical to the work. John has conducted many studies of people’s preferences and willingness to participate in development activities, such as community housing and infrastructure in Botswana, squatter upgrading in Morocco, civil society activities in South Africa, chemical industry disaster management programs in Thailand, or conflict mediation in Kosovo. At a midpoint in his career, John was able to bring his development knowledge back to the academic arena through a program sponsored by USAID, which he directed, called the Development Studies Program to bring mid-career US foreign service officers and foreign nationals working in overseas missions state-of -the art socio-cultural, political and economic theory .

Key to an anthropologist working in the international development arena, John notes, is to work in a cooperative, interdisciplinary manner, often aiding teams to “soft land” in different cultural climes. Besides doing the analytics of cross-cultural adaptation of development programs, a secondary and less formal role for anthropologists is to help other specialists understand and appreciate socio-cultural conditions. On the other hand, John points to the need for the anthropologist, in support of a holistic approach to international development, to develop a significant knowledge base in the sectors in which one is working, e.g., economic growth, health, education, infrastructure, democracy and governance, monitoring and evaluation, among others. This opportunity to continue learning about state of the art knowledge on sectors, new countries, and new cultures is one of the intriguing aspects of doing development work, John suggests.

Acquiring his jobs has involved a bit of serendipity, though John has found that being in the right place at the right time also involves the art and science of networking, which anthropologists are among the best at developing. One job, which seemed to involve a lot of good luck to John at the time, was his cold-calling on several offices of the UN in New York City before the days of internet announcements. A recruiter in headquarters suggested that he head to an office across the street to see if the Middle East office of the pre-cursor to UN HABITAT might have some interest in his background and skills. Buzzed in from the street, John shared his interest with an official who, then, slowly opened his top desk drawer and carefully pulled out a scope of work for a position on a national physical planning project in Libya. The position required a PhD. in anthropology who had done research in Libya and who spoke Arabic and it needed immediate filling. John recounts that he said to himself, “hmmm, there are only three of us in the world, a Libyan, a Brit, and me and I’m the one sitting here who can fill this official’s needs in a ‘New York minute!’” He got the job on the spot and moved his family to Libya, for the second time.

A key factor in being a user-friendly anthropologist, John suggests, is the ability to communicate to development officials about layered socio-political and economic conditions in a common-sense manner. This means translating theory to practice with a statement of the practical implications for a project design adapted to local conditions and needs. An example of a project John advised on was one ill-adapted to local conditions, a cooperatively-designed housing and community development program in Cairo, Egypt. With no tradition of individual shared housing ownership in Egypt it became clear to John early on that the concept of cooperative housing was probably not feasible. In another case, he employed detailed ethnographic data combined with household survey information to advise officials on appropriate house and plot design and local infrastructure in rural villages in Botswana. With a team of Canadian architects he designed a series of prepared house and plot models in physical form which could be manipulated by villagers in order to test physical planning issues. Incidentally, based on this work, John was given a WAPA PRAXIS runner-up award for ‘excellence in translating anthropological knowledge into action.’

An important aspect of John’s work over the years has been in the area of applied statistics. He has found that a capability to design and implement sample surveys has been invaluable in both his academic and applied work. A total household survey of the oasis villages in Libya where he did his fieldwork comprised part of his doctoral research, alongside his extensive ethnographic research. While personally inclined more to qualitative research, approximately 75% of his applied work has involved survey work of one kind or another. Especially in his most recent positions, monitoring and evaluation, statistical analyses have been heavily implicated. Perhaps as implied in the above is John’s perspective that computer literacy, both in terms of software analytics and flexibility in developing textual graphics, is today de rigeur.

In the end, John reviews his career as a development anthropologist as one of self-fulfillment, through a modest contribution to humanitarian initiatives that help less privileged people across the globe. He has always thought of himself as occupying an external space, “looking in from the outside,” as it were, but always with the aim of getting to know better “the other” and reflecting back knowledge of how to improve the human condition. The reality of the work, however, is always messier and does not always live up to the lofty ideals we set for ourselves. But herein lies the challenge, knowing the limitations of our profession and understanding that it is a cooperative venture from the outset, both with the people we want to know about and the professionals we need to work with to accomplish important goals. The journey is a worthy one.

New Directions in U.S. Foreign Assistance and New Roles for Anthropologists, Department of Anthropology, College of William and Mary, 1991. Co-edited with Mari Clarke.

Priorities for Paced Growth in Mahalapye, Botswana: A Survey of Residents’ Change and its Affordability, USAID 1981 (with Jesse Jones) pdf.usaid.gov/pdf_docs/PNAAR257.pdf

HOUSING AND HEALTH: An Analysis for Use in Planning, Design and Evaluation of Low-Income Housing Programs, USIAD, Cooperative housing Foundations, 1981. With Betsey Stephens. www.ircwash.org/sites/default/files/203.1-81HO-18992.pdf

Sex and Symbol in the Treatment of Women: the Wedding Rite in a Libyan Oasis Community. American Ethnologist, November 1975.   onlinelibrary.wiley.com › … › Vol 2 Issue 4

The Sociocultural and Economic Exchange between Augila Oasis and the Cyrenaican Bedouin in Libya’s Eastern Sahara: A Centuries-long Symbiotic Relationship, in Bridges Across the Sahara—Social, Economic and Cultural Impact of the Trans-Sahara Trade during the 19th and 20th Centuries, Cambridge Scholars Publishing. Ed. Ali Abdullatif Ahmida, 2009.