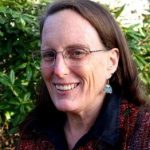 Greenough returned to the U.S. in 2001 to pursue a PhD in cultural anthropology with an emphasis on development at the University of Kentucky.

“I focused on mobile Fulɓe pastoralists in Niger for both my thesis and my dissertation. After looking at several different jobs – even teaching, though I was pretty sure I didn’t want to do that – I interviewed for a job with a colleague of my advisor and a team based at Columbia University. I didn’t get that job, but my advisor’s colleague steered me toward another post-doc job, which I did get: working on one of the five projects of the Challenge Program for Water and Food–Volta River Basin (CPWF-Volta), based in Ouagadougou, Burkina Faso. I was to research the innovations emerging from the Research for Development activities of the Volta program. It was an interesting introduction to Agricultural Innovation Systems approaches. As I’d already spent so much time living in West Africa, living in Ouaga was just adjusting to living in a big city rather than a small town.”

Greenough points to several of the challenges she faced in her position at CPWF-Volta in relation to her training as an anthropologist and the disconnect that can occur in an interdisciplinary setting.

“In the last job, which was much more development-based, I struggled to be and stay an objective anthropologist. It was very difficult as I was too critical of much of the “development” that I saw happening, and that criticism got in the way of whatever ethnography I was trying to do. I started (with the advice of a geographer in the program) with the protocol of “no evaluation” on the principal that if the researchers and technicians thought they were being evaluated, they would not respond to interviews. This went somewhat counter to our director’s view of my job; she had a very benign view of monitoring and evaluation as providing opportunities for learning and growing. Most of the researchers did not share this viewpoint, and so I felt torn between my desire to do ethnography, my long established tendency to critique all development, and my boss’ desire to have someone help her with 1) discovering and describing all the emerging changes and innovations (if there were any) and 2) helping with monitoring and evaluation.”

When that contract ended, Greenough began her current position at WASCAL, “a German-West African partnership to research the implications of climate change on natural and socio-ecological systems.”   Though she was familiar with the organization, she relied on support from colleagues and networking to inquire about the job.

“I already knew a bit about WASCAL and some of the people involved, because for the first year that I worked for CPWF, they were in the same building with us. I saw an ad through EAnth, the Environmental Anthropology listserv, for a Senior Researcher to develop a social science unit for WASCAL’s Competence Center, the research headquarters in Ouagadougou. I didn’t have the qualifications they were looking for, but thought that perhaps a Senior Researcher would need some assistants. I talked to the local coordinator, whom I already knew, and gave him my CV. He was encouraging and put me in touch with the director, who asked me to write a statement (which I thought of as a research statement) and contact some of the researchers based in Germany. An anthropologist in Bonn was very supporting and helpful in giving me suggestions, as were a few of her colleagues.”

While Greenough struggled in her previous workplace, her new position is more research-based and she can focus on her area of expertise, pastoralism.

“Unlike the previous program, WASCAL is research, not tied to development, but applied with the aim of informing policy. It’s a relatively new institution, just forming, but they seem to take their research, and the problem of climate change, very seriously. It’s meant to be here for the long term, and seems to have a good financial base.”

As an anthropologist with experience in interdisciplinary organizations, Greenough notes that she is often lumped together with the other social scientists but asserts that the research emphasis of WASCAL allows her more freedom to utilize anthropological methods.

“Most of the scientists in this job, as well as in the last, are physical and natural scientists – agronomists, hydrologists, soil scientists, ecologists – and they sort of know what social scientists do, in general, but not what anthropologists do.”

“I will try to base my work on ethnography and participant-observation as much possible. It wasn’t really possible in the last job – everything was so scattered and I was trying to research everything and everyone from scientists to farmers.   In this new job, I hope to just do research, but besides pastoralists and other rural producers and traders, I aim to also involve policy makers, local research institutions, and extension agencies. The work will probably not be directly development, unless I can somehow work in some kind of participatory development. That is not on the WASCAL menu, however. And that’s okay, for now, until it starts to bother me that I’m just doing extractive research. That might not be too far off.”

As far as important lessons for emerging anthropologists, Greenough’s experience shows that you can both assess your suitability for an organization even when you are not entirely familiar with the work they do.

“Having WASCAL as a “neighbor” was chance, but then I took that chance and jumped on a possible opening, talking to people and finding out what it would take to get the job. Getting the CPWF job seemed like a chance, also, but our director told me that it was my ten minute presentation on Innovation Research over Skype that sold her. I had known nothing about IR when she asked for the presentation and did a bunch of internet research in a few days. Otherwise, I’m terrible at phone and Skype interviews.”

An additional feature of interdisciplinary work that can be challenging for an anthropologist is the scope of methods. While a PhD can prepare you to be an excellent researcher with precise data gathering and analytical tools, Greenough does acknowledge the significance of other methods in her field.

“I wish I had had more experience with modeling and statistics, even though I had a brief debate with a professor friend who insisted that anthropology students should concentrate on ethnography, because that’s what anthropologists do best. I don’t mean necessarily become an expert in agent-based or other modeling, or become a statistician, but in an interdisciplinary setting, modeling and statistics are the languages of your fellow researchers, even other social scientists.”

For those approaching their careers, Greenough recommends that you work your way into a position that will lead you to the job you want. Although she was not overjoyed by her work at CPWF-Volta, she enjoys life in West Africa and researching pastoralism. Taking a job that was not the best fit in the long run provided her with the experience she needed to move into a more satisfying position.

To see some of Karen Greenough’s work, click here.