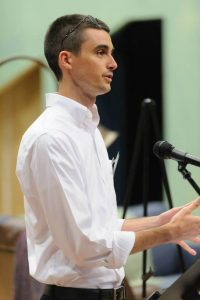 Biography
Kenny was raised in Memphis and attended Christian Brothers University, where he completed a BA in Religion and Philosophy in 2010. After completing his degree, he served two years through the Lasallian Volunteers program, tutoring and mentoring in a Catholic high school in New York City. He returned to Memphis in 2012 and enrolled in the graduate program in applied anthropology at the University of Memphis, where he focused primarily on sustainability and community development in the Memphis area.

Kenny completed his MA in anthropology in May of 2014 and immediately joined the staff at Center for Transforming Communities (CTC), a Memphis-based organization that provides training and ongoing technical support to churches and other stakeholders in a variety of urban and rural communities in West Tennessee. At CTC, Kenny uses his background in anthropology to assist the organization in a number of capacities, including program development, program evaluation, research, grant writing, training and facilitation, and marketing and communications.